With a population of 38 million, California has a lot of energy needs and a majority of that population is very opinionated about the route they should take. McAllister has a big role in making sure that they are happy and when he takes action, there are a whole host of consequences he has to carefully consider. The state has a long history of supporting green initiatives and he says it’s partially due to facilitating the private sector, rather than getting in the way.

Some of the initiatives that California is currently leading on are the Clean Energy and Pollution Reduction Act that was passed in 2015. This requires that 50% of electricity comes from renewable sources, it includes strategies to significantly reduce petroleum use, and marks a transition to cleaner heating fuels, among other initiatives.

And in 2016, California has instated the California Global Warning Solutions Act, which is emphasizing what McAllister sees as necessary, a continued focus on buildings.

None of this comes easy. California has been investing very heavily in clean energy programs, to the tune of $1.3 billion per year. Again, innovation from the private sector is encouraged, with a focus on performance standards, rather than prescriptive standards. The aim is to remain flexible and to support innovative solutions.

Another aggressive policy goal for California is to accomplish zero net energy for commercial by 2030, where the same goal for housing is 2020. This policy is sure to start spreading across federal policies as well.

Clifton, as the builder of the group and a strong sustainability advocate, presented the high level issue and proposed a way to correctly define the problem—as he puts it, reducing energy use with only an 84-year supply.

Whereas Karagiozis and his game-changing research at Owens Corning, leads him to say that the industry is evolving in a way that architects will be designing for processes. New designs will need to address durability, followed by thermal comfort, then energy performance. 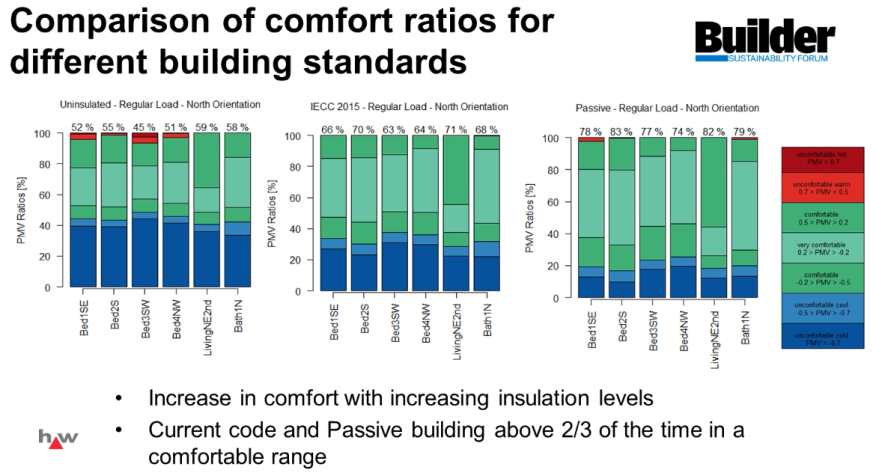 ABOVE:
Achilles Karagiozis showed how comfort ratios change based on following his design principles.

Regnier discussed the power of future whole building systems integration that could produce project savings up to 40 percent. Just as Karagiozis did, she also spoke to the evolving needs of design. Right now the traditional photovoltaic systems just feed the grid. However, as more and more photovoltaics are online and they all essentially turn off when the sun goes down, the grid will need to manage that quickly. This will demand more intelligent grid infrastructure, smarter energy storage and dynamic management.